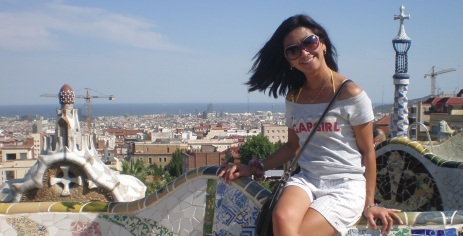 Being neither Vicky nor Cristina, I didn’t meet Juan Antonio in Barcelona. I don’t think I would have been able to handle him anyway, or Maria Elena for that matter. I still fell in love with Barcelona and I am sure to go back, not only to see the completed Sagrada Familia. Did I mention that Vicky, Cristina, Juan Antonio and Maria Elena are fictitious characters from a 2008 movie, Vicky Cristina Barcelona? I have now.

Last Saturday though, I only went 17 km away from home; to Vicky Cristina in Craighall. I had researched a bit about the restaurant and it seemed like the perfect venue for our girls’ night out. We wanted to get dinner, catch up and hopefully dance a bit. I sent an inquiry via their Facebook page and I didn’t get a response until the day of our planned night out. However, because Magic Mike didn’t have a show on our chosen date and I still can’t get myself to again extend my support to Montecasino and its tenants, even to an almost-favorite Cantare [after a recent disappointment experienced from the casino’s/banquet’s management], I made a booking at Vicky Cristina telephonically. Normally, I wouldn’t have given them the chance after the “bad service” via Facebook.

Before experiencing the restaurant, I already appreciated the honesty. The website (http://www.vickycristinas.com), under ‘Menu’, states: “Although taking inspiration from Spain, we makes (sic) no claim to be the final word on Spanish food – and per culinary tradition elements of the menu are interpretations of classic dishes rather than faithful reproductions.” At least those who have travelled to Spain and have sampled comida Española would not expect authentic Spanish cuisine only to be disappointed. I was fully aware that we would be served Spanish-inspired food and I was ready to try what Vicky Cristina has to offer. I love food. I love Spain. I was excited.

I would have loved to watch some Spanish dancing, too, but we were late and completely missed it. Luckily, I was there more for the food and not the entertainment. After all, it was to enjoy the catch up with the girls and the best way to start was to share a jug of Sangria. I also ordered a Spanish Platter, Plato de Queso y Embutidos in Spanish. I only knew embutido to be meatloaf, in Filipino. I don’t quite know what this “embutidos” is but Google said they are sausages. I’m learning Spanish and although I got to cocino, cocina and comida already and even desayuno, almuerzo, cena, even sopa, huevo and emparedados, I didn’t encounter embutidos yet. Anyway, it is a platter of traditional Spanish cured meats, marinated cheese and fresh seasonal fruits. I liked everything in the platter and nothing was wasted at all.

Before the platter, I knew I had to try the gazpacho oyster shot. I love oysters and I can easily devour 2 dozens of it. Gazpacho con ostra has double shot of cold tomato and vegetable soup topped with a raw (duh!) oyster. My only regret is I didn’t have tabasco. Next time, I will have it hot and perhaps 2 oyster shots would be good. 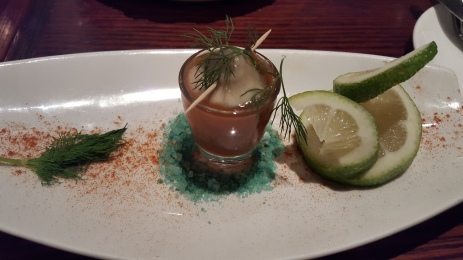 It is unfortunate that even though I love food, I don’t really eat a lot. I’m also a slow eater so I can’t really order much. I will just have to go back to try at least half of the menu, not in one go though.

While my friends had full meals, I wanted to taste more than one item, in smaller quantities, so it was tapas for me. I ordered gambas con chorizo, skewered prawn tails wrapped with shaved Spanish chorizo. It was absolutely scrumptious! I will definitely order it again but I will have it with something else as my Spanish Omelette (Tortilla Española) was just okay. I am sure that I will find more gastronomic treasures in Vicky Cristina, enough to satisfy me until I visit Spain again.

One thought on “Vicky Cristina not quite Barcelona”