But I don’t make the food I consume with much gusto. Let’s just say that I want to be in the position to appreciate another’s passion and convey words of compliments. Plus, I can’t be a cook to save my life.

We tend to eat out a bit though often not fine dining. Since Montecasino is a favorite entertainment place, bring only 5km from home, a couple of restaurants or eating places have become our go-to dining places, such as Portuguese Beira Alta and Italian Primafila Mastrantonio. Fego Caffe one, too. In fact, it’s like home.

However, we had not been to Fego for a while so when we went there over a week ago (I know I post late, do excuse me), the new menu was a pleasant surprise. The old favorites are still there albeit with slight modifications – in names and/or presentations – which is a good thing because we love Fego’s pasta dishes, the bolognese specifically. But, they served them with either spaghetti, or fettuccine, or penne. My son would choose penne, I’d order spaghetti for my little daughter and I’d have fettuccini.

Given the option, I’ll pick linguine any time. So, I was ecstatic to see on the new menu that the pasta dishes are now made with linguini. In fact, our waiter didn’t even ask what pasta I would like. 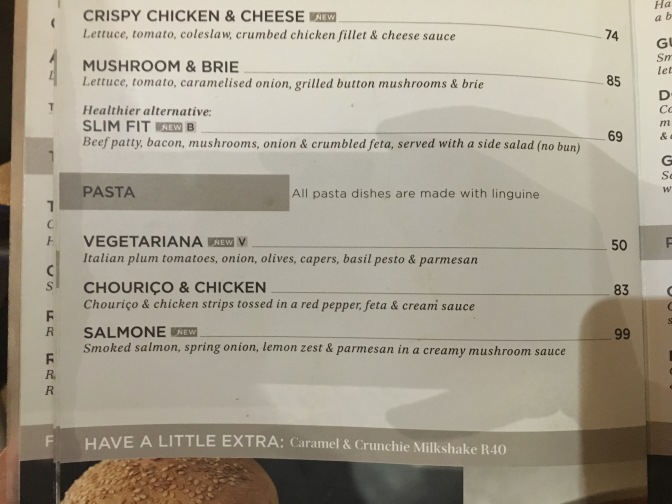 Then he came back a few minutes later and asked if I’d have spaghetti or penne or fettuccine. I said linguine. I was told they don’t have linguini. I asked for the manager. I showed him the menu. The manager said it was head office’s oversight. Blah-blah! I said it was fine but they must let head office know they should serve what’s on the menu. I would have spaghetti… Or was it fettuccini.

I said I’d tweet about it. I must have. I did say Fego Caffe Montecasino was not at fault; head office was.

Another few minutes later, linguine magically appeared in the kitchen and they could cook my Chouriço and Chicken with linguine. It wasn’t necessary but I accepted it and said thank you.

Everything after was fantastic. Both the manager and waiter were attentive and made sure we were happily satisfied. More importantly, my Chouriço and Chicken Strips tossed in a Red Pepper, Feta and Cream Sauce was absolutely delectable. (The huge serving is a plus since one order makes two meals.) 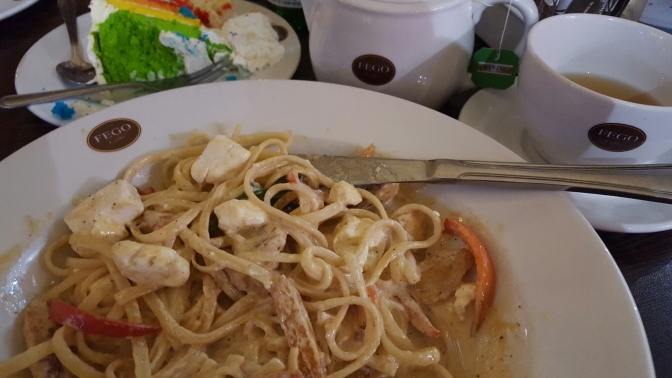 (Above is my leftover. The main (featured) picture is the full portion.)

We were back again today – yesterday actually, to be accurate – and my all-time favorite Chicken Basket, now called Chicken Platter, is still as enjoyably palatable as ever.

The chicken is soft and juicy inside but crispy outside. This time, the jalapeño isn’t soaking in vinegar as before and I ate the whole thing. The chicken satay is still tasty. The thin fries, mayonnaise and sweet chilli sauce complete the platter.

And, my lemon hot water washed everything down.

(The rainbow cake is my daughter’s.)