Okay, it really isn’t mine but it is part of my heritage. I don’t even think I have truly and properly experienced the whole walled city – ever! I will correct this shortcoming next time I go ‘home’.

(It’s really not home anymore but it’s where I’m originally from. I suppose it will always be referred to as such although I don’t think I’d live there again. But, one can never truly know. Sometimes, the least expected or totally unplanned is what happens. There was a plan but that expired last year.)

I am referring to Intramuros, also called The Walled City, in the new Manila City. Why new Manila City? Well, Intramuros (translation: “inside the walls” or “within the walls”) was the City of Manila during the Spanish era. Spain ruled the Philippines for over 300 years. (This gives an indication why my surname is Spanish.) It was the capital and seat of the Spanish sovereignty in the Orient. Under the Spanish rule, the Filipinos were converted to Catholicism. We didn’t only get the religion; we got the Spanish surnames when we were baptized. There are, of course, some Filipinos who kept their native surnames.

Intramuros has rich history. I wish I knew more about it. It is one place in the Philippines that was front and center of everything and suffered major damages, some irreparable, during the wars. I am sure that I learned some Philippine history at school but it became a forgotten past. It is one of the stuff of the past that I relegated to insignificant-in-my-present-life category. I am so ‘un-Filipino’ and I should probably be embarrassed by my lack of patriotism but I hope I can be excused, justified by the fact that I have been in Africa for more than half of my life.

I had to refresh my memory. Apart from the information on Wikipedia, I found an excellent article on Intramuros that prompted me promise to myself that we are going to walk the walled city next year. (I hope it’s safe and we don’t get mugged.) I will revisit Fort Santiago and I will take my South African family to see the side of Manila that is worth seeing. In fact, it is the must-see Manila.

For now, I am sharing [with you] just a little of the walled city through a round of golf in Club Intramuros.

Considering that the place is a tourist attraction, the locals don’t seem to know how to get to Club Intramuros. We were so eager to check out the Club that we went to Intramuros on our third day in the country. A cousin’s child, who was driving us around, is meant to be an Uber driver but we drove in circles and had to ask where’s the entrance to the Club. Even the people hanging around the vicinity were not quite sure how to direct us to the main gate. It was quite strange. The GPS wasn’t helpful either as we needed the exact location of the gate. We later discovered that there are two gates. I will get back to this in a bit.

Our plan was to get all the information and perhaps book our game, in case in was necessary to book in advance. We were not far away, anyway. My son was at December La Salle University, my Alma Mater, writing his college entrance exam. We also had time to kill. We were not dressed for golf though so when we decided to hit some balls, I was barefoot. I just couldn’t swing the club and hit the balls with my high heels on.

Back to finding the entrance/exit of the Club, the main gate that golfers [must] use is  the one with the sign as pictured above (before the videos) and below.

The problem was although we were there three days before, we didn’t know how sto find it again. Is it possible that our Uber driver was pretending not to know the place in order to drive us around and make more from us? (I will do a separate post about the taxi and Uber drivers.) Anyway, we ended up near the halfway house. We got off our Uber – Uber Black! – and took the bicycle with a side car. Note that we had hubby’s bulky tour bag. And, his head almost pushed the roof out. Haha! He’s 6’1” and those makeshift vehicles are ideal for the petite Filipino size.

There isn’t only a road between the 9th tee and the 10th tee. (I seem to think that the road is between the 8th and the 9th but I’ll take hubby’s word as he has the better memory between us.) The whole course is surrounded by roads; it is surrounded by the city. Buildings rise above the walls of the golf course, providing a stunning backdrop. 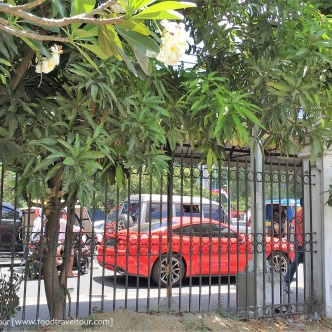 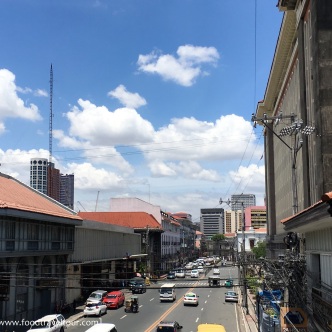 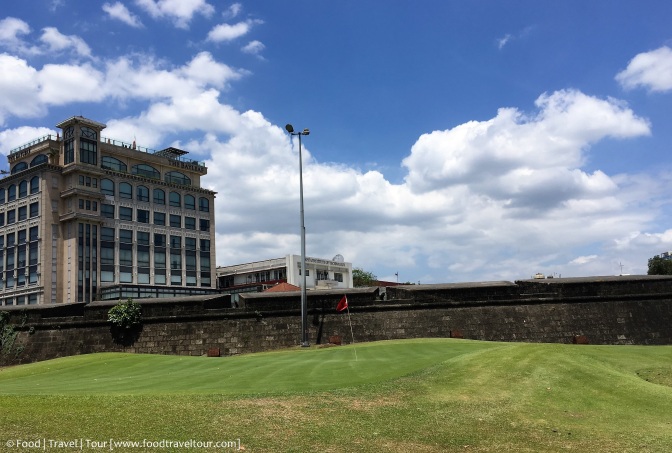 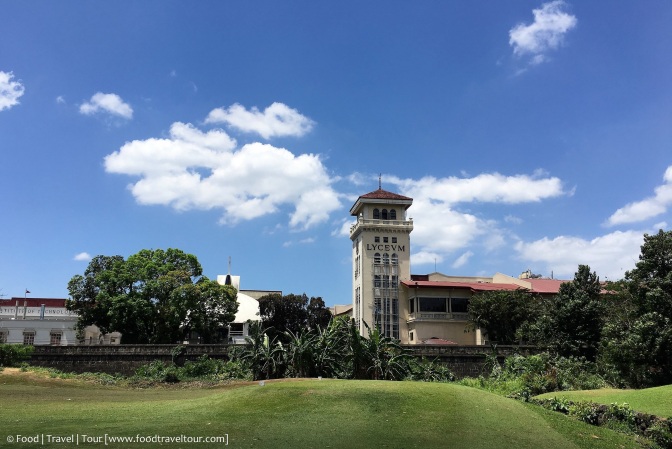 Despite getting lost, we made our tee off time. We were probably late. Fortunately, the staff at the pro shop are friendly and accommodating, and it wasn’t a busy day.

It was a lovely day, although perhaps not for golf especially with the high humidity, which is normal. If I thought it would be like playing in Johannesburg, I may have lost my mind a little. The mixture of dust from the city’s pollution and sweat on my skin was not something I was used to. It was uncomfortable.

But, the photographs turned out pretty good. Here are some of the ones I took while we were playing. Unlike hubby, despite my love for golf, I am not as serious as he is, and I soak in the environment and enjoy the beauty. Golf courses are beautiful. 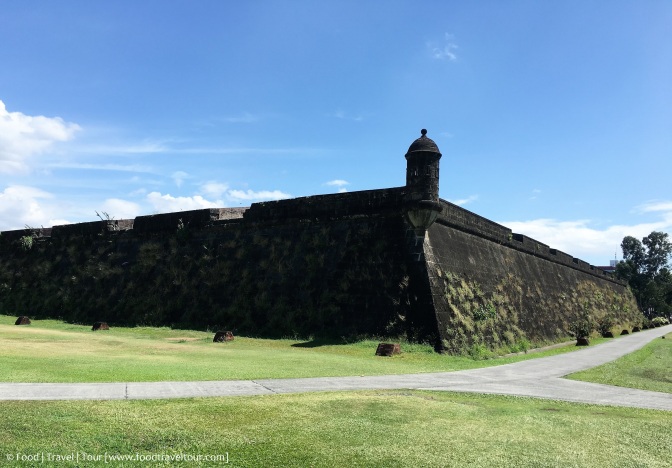 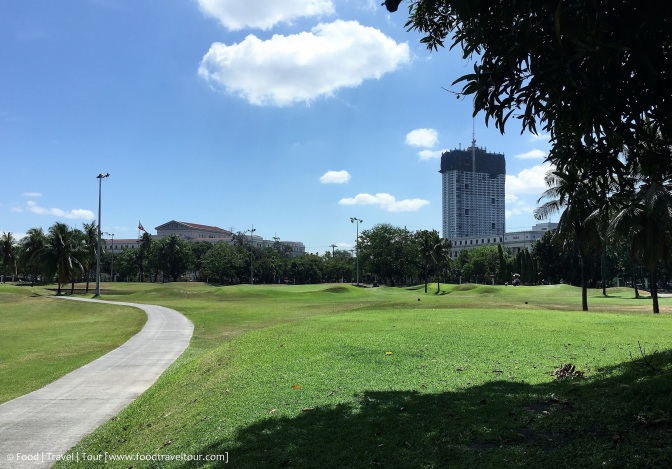 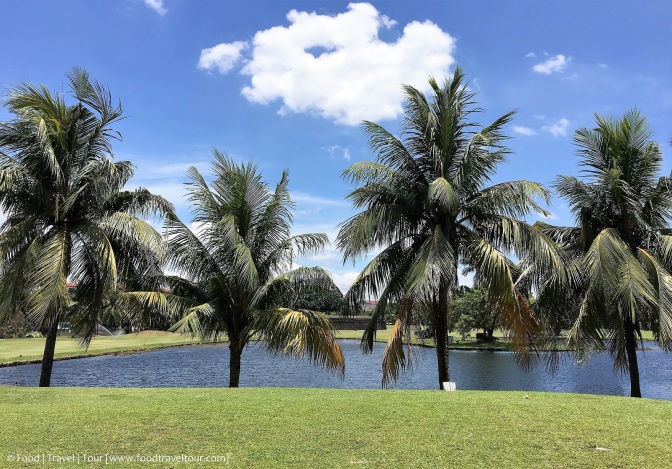 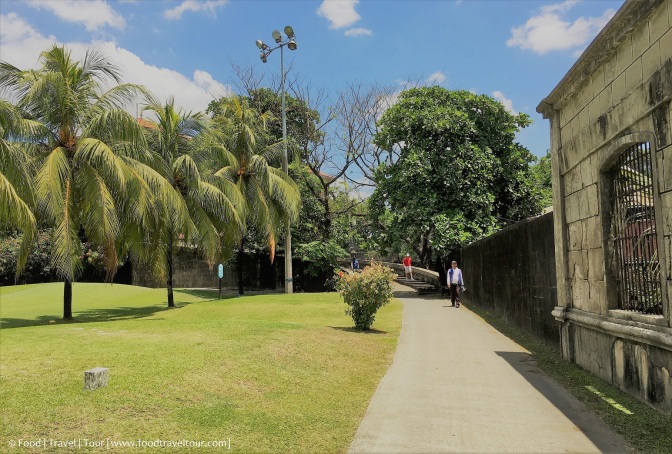 Having played golf only in South Africa and Botswana, I was expecting the halfway house and clubhouse to be similar to what we have. The same goes for the food. I was surprised not to find what I’d usually have at the halfway house. I ended up grabbing a single-serving chiffon-cake-type snack and off we went.

(By this time, my son had finished writing his college entrance exam at Mapua Institute of Technology, which was just outside the club, not far from the gates between the front nine and the back nine. I had an alternate photographer. I could be IN the pictures!)

We did have some selfies 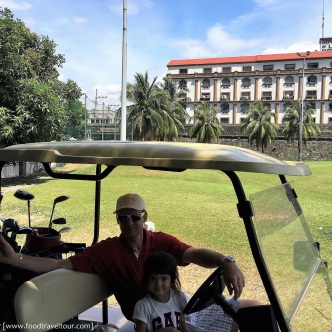 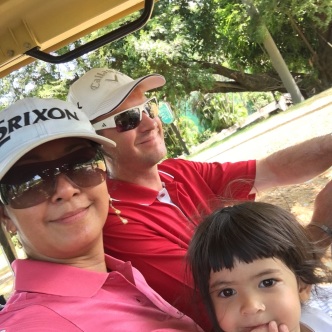 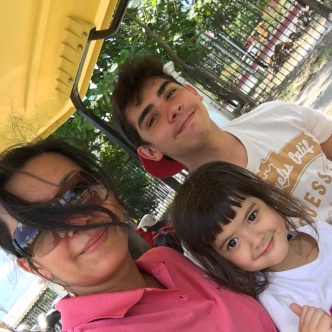 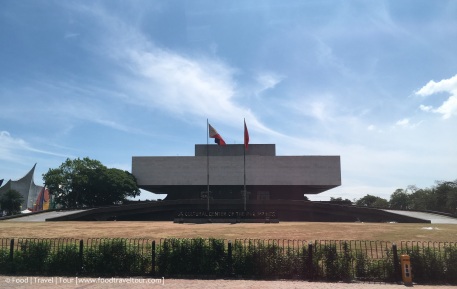 Although I enjoyed my game of golf at Club Intramuros, I should have also joined hubby in Villamor Airbase Golf Course, which he says is better than Intramuros, as expected (being more expensive). Also, I could have been there to discourage the “enticing ladies” who “make friends” with foreign male golfers from getting too friendly with my man. Haha!

The one thing that disappointed me at Club Intramuros was that apart from paying the caddie association fee at the pro shop, we also had to pay – not tip only – the caddies themselves and they had a set minimum fee. I understand now why the Japanese, Chinese and Koreans come to South Africa to play golf. We do not only have awesome weather, golfing here carries a reasonable price tag.

21 thoughts on “My Walled City”